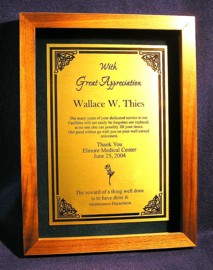 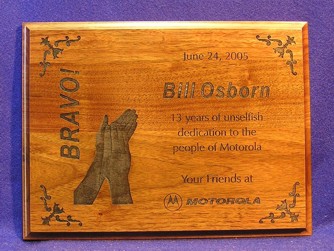 I've seen a lot of changes in the awards business over the last 31-plus years. When I started, we used pantograph engraving machines, set up the type, and manually engraved one line at a time. Then we would tear down, set up a new line of type, move the plaque up a notch and engrave the next line. It took hours to engrave a plaque. Our fear was finding a mistake after spending all that time engraving. I always did plaques after closing to avoid interruption and loss of concentration while engraving.

Then came the computer engraver. I was at the Chicago Awards Show and saw Will Dehlgren demonstrate his marvelous machine. All of us engravers thought a machine could not replace us. The set-up took forever. We could have the plaque done before he even started the machine.

But then he would have another job set up while the computer engraver engraved. We all looked at each other as the machine kept producing one after another. No coffee breaks, no lunch breaks—it just kept engraving!

My thought was, Now I can go home at night and be with my family. I can enjoy watching and being involved with my children. This was truly a revolution in engraving awards. We could proof the plaque on the computer screen before engraving. This new feature, called spellcheck, would catch the mistakes we missed. 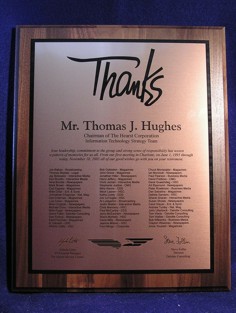 Today, we have different styles of engraving plaques—diamond drag engraving and laser engraving. We use the diamond drag engraving when the plaques have a brass engraving plate. With the diamond, we plow the metal to each side using a descendant of Will's first computer engraving machines. About ten years later, lasers were brought into the awards industry. Here, we have coated metals that we burn the coating from, exposing the metal underneath (usually brass). Now we can do fancy graphics and have many more fonts to choose from. With more powerful lasers, we now laser directly into the plaque board with great results. 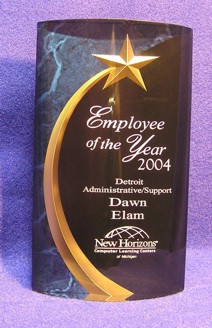 With laser engraving, we started experimenting with using other materials to engrave. Several fires were started in our production area while testing different substances. Today's acrylic awards are phenomenal. They give you the look of crystal for a fraction of the cost, and the number of shapes available is much greater as well. 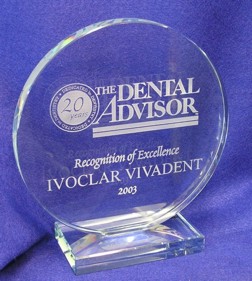 Etching crystal is the granddaddy of high-end quality awards! Just the weight alone of the crystal says quality. With so many crystal types, including jade and optical, if you are looking for the ultimate "WOW" factor—crystal is it. You are sure to find something to impress, from classic shapes like circles and spears to free-form crystal awards. We etch crystal vases as awards too. 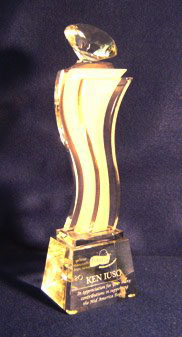 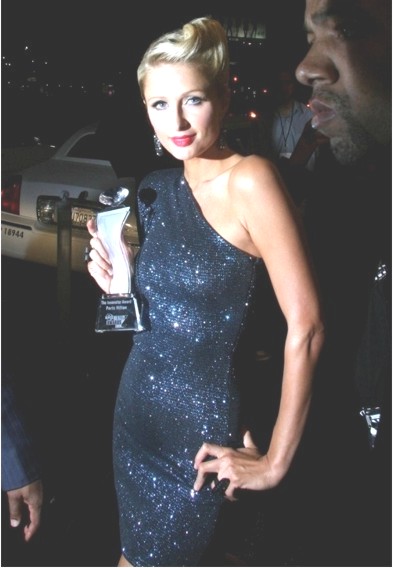 Paris Hilton received a crystal Fox Reality Award on October 14th, 2009. When we saw this picture, we quickly realized that we carry the same award too!

If you want to give the same award that Paris won, you can order it from us. Please email your logo to etched@engravecon.com at a high resolution for the best results. Use an export format like eps, jpeg, or tiff—reference your name and the Paris Hilton award in your email.

Bring or ship your award to us for engraving

If you live in Southeast Michigan, we are worth the trip!
Visit us in our Plymouth store or send us information about the product you would like engraved.

Directions to Our Store To Ship Engraved Orders

What People Say About Us

I received my desk name plate. It is beautiful! Thank you for your patience in getting it the way I wanted it.

Thanks for your prompt service. I certainly will keep you in mind in the future.

Thank you so much for this accommodation in the order change. I really appreciate it and will not forget it. Best Regards,

We received it Thursday....it was gorgeous. Exactly what we wanted!! Thank you. I will do business again in the future.

Thank you for everything. I will definitely use you again and always recommend you.